One of the abiding joys of life at Brightside is that, every so often, Nature reveals one of her secrets. A Mystery of Life is explained. A puzzle-piece falls into place.

It has been my experience that such received wisdom must be precisely that: received.
As a gift bestowed by the environment, it cannot be sought.

Indeed, I've found that a goal-oriented approach to enlightenment tends to drive the light away! Which is not the same thing as saying that understanding is passively acquired. In order to receive a gift of wisdom, one must be receptive, which is not a passive state of being--not at all. Receptivity requires attentive intention. Receptivity takes practice.

And since modern American culture doesn't train us to receptivity so much as to a locked-and-loaded adherence to prior positions, I'll go so far as to say that receptivity no longer comes naturally to us, despite the fact that our receptivity to Nature has been, throughout human history, our most essential survival skill. The long and the short of it is this: receptivity has morphed from a necessary way of life into lifestyle choice, consciously and deliberately made.

When I am receptive to Nature, I am, most of all, willing to receive new information.

I am willing to set aside all that I think I already know about the environment--all that I think I already know about how it looks, smells, tastes, sounds, and feels--and receive what surrounds me, right at this moment. When I am receptive to Nature, I allow her to enter my senses as if for the very first time. I don't know what shagbark hickory bark looks like. I don't know what color green moss is. I don't know how the dirt under the leaf litter at the base of an oak tree smells.

When I am receptive, everything my senses experience is new. And it is out of this newness that understanding arrives, unbidden.

March 8 was our third sparklingly bright sunny day in a row. The blue of the sky a shock not just to the eyes, but to the heart, after nearly four months of monochromatic gloom. The sun's rays felt like tickling fingers in my brain, nudging sleeping neurons back to wakefulness.

I knew what I had to do. I had to go to Camp Allegheny and walk through the pine forest to the cattle gate and out toward the Varner homestead. I had to stand in the sun and look out at the snow-covered ridges.

Plowing created a rather formidable snow wall along the pike. At a point near the camping area, I clambered up the wall and took a gingerly step, hoping I wouldn't sink too deeply. Happily, I discovered that the sun had baked the snow, forming a crust that kept me aloft as I moved toward the forest. In the shade, the cascading snow swales were softer, and I occasionally sank to my knees. It wasn't easy walking, but I was in no hurry. When I sank, I used the opportunity to look and listen.

The pines grow so closely together that green branches survive only at the treetops. All lower branches have long since died and broken, leaving every trunk decorated with a ladder-like progression of rungs. At eye level, the appearance of this forest is extremely architectural, and very high-concept, all lines and angles drawn in pen and ink. It struck me, once again, as entirely implausible. The sort of image that, if drawn, would be so easily dismissed as fake.

I heard the soft roar of the wind in pine needles high above, not unlike the sound of the sea in a conch shell. An object blown from a treetop, a pinecone perhaps, fell through the stubby branches with a resonant "plink, plink, plink, PLUNK, PLUNK, plink," that reminded me of a cascading ball in a pachinko machine.

At the cattle gate, the snow along the ridge was pristine, unmarred by tracks of any kind. It glistened as if glazed with egg white.

I walked toward the ancient maples on the north side of the ridge. Standing at the drip-line of the first tree, I looked up, stunned to see that the branch tips and buds were red. And not just a wee bit red, but the deep, glowing red of dried cherries. While the snow beneath my feet must have been three feet deep, I saw that the snow around the trunk had melted, exposing a ring of earth to the sun. The first earth to be so exposed in more than two months. Spring, I thought, laughing aloud. It really is coming!

Then I made my way to the next tree, eager to check its progress. Perhaps the first tree's condition was a fluke. But no, this wizened old soldier had reddened as well. I stood with the sun warming my back, gazing appreciatively at the tree--from the new life pulsing at its branch tips to the deeply creased, lichen-laden skin of its hoary trunk. That's when I noticed a damp patch on the underside of a twig. I studied it a moment, wonderingly. And then my eyes found another darkened spot on another twig.

I turned toward the sun and, looking up into the branches, saw multitudes of crystalline droplets, hanging beneath the twigs like tiny opals. Sap!

I reached up and touched a sticky drop and put my finger to my tongue. Honey child, it tasted exactly like maple syrup. The sun was cooking the sap right there on the tree. As we say down south, I hooted and hollered.

I also continued my taste test--quickly resolving to avoid the whole middleman-effect of my finger and just lick the droplets directly. (Yes, okay, yes, I licked a tree!) Sure enough, the new drops tasted like sugar maple sap, which is to say they tasted for all intents and purposes like water. But the drops that had been baking in the sun tasted like they came straight from Ivan Puffenbarger's syrup jug.

And that's when it hit me like a sudden case of vertigo: this is exactly how the first person discovered that maple sap became sweet when heated. I was re-experiencing the original experience, the original moment of understanding. A moment from which the idea developed that the watery sap from a hardwood tree could be transformed into a delicious food.

I could almost hear God laughing. Yeah, that Dawn, she's slow alright, but give the woman enough time and she catches on.

Just another day in the Alleghenies? Well, actually, yes. Just another day outdoors, where receptivity to Nature's wonders never fails to satisfy, nor to keep me from wanting more. 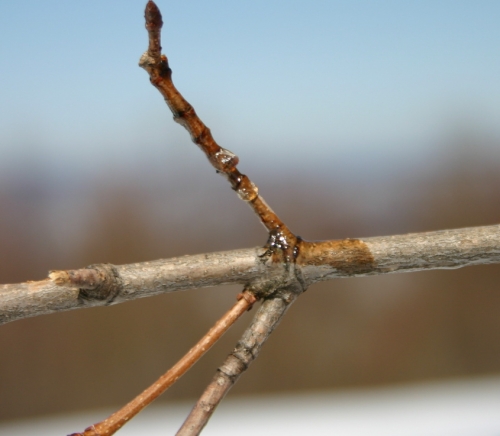