Ode to Stickerz: A Hen to Love

Our four-year-old hen Stickerz died this week. Xena, Warrior Queen of chickendom, this bird had spurs, if smallish ones, and attitude to match. I often noted aloud that she was the bird you would want with you in a survival situation. Not because she was a good egg layer, although she was, but because she was an incredibly alert, ruthless hunter. I once observed her spear a young garter snake and then swallow it whole, tail still wiggling.

She was also fearless. If it can be said that a chicken can have a mind of her own, Stickerz did. Anyone who has tended a flock of chickens (we had 15) has seen group-think manifest. Watching them, I often think they are in a sense one organism, a grove of aspen sharing a neural network, trembling together in the breeze. Not Stickerz. She was the exception that proved the rule. While the rest of the girls appeared to be led, en masse, from one stimulation to the next, Stickerz always had her beady eye on the bigger picture. It’s not that she didn’t hang out with the crowd—she did. But if there were larger opportunities to exploit, she was the first to break from the group and go her own way.

Far from frightened by engines, she seemed attracted to them. She, much more than any of her sisters, linked the sound of engines to easy pickings. When I opened the truck door, she was on the floorboard or the front seat before I could get out and close it. I learned not to leave trays of transplants unattended in the truck bed; Stickerz would seize the moment to make short work of my seedlings. Start up the lawnmower and Stickerz would appear, flying up to David’s lap for a ride out to the good stuff. Once the blade was engaged, she’d follow in its wake, snatching up with fierce sewing needle precision whatever the mower spit out. Same concept applied with the weed eater or tiller.

Sure, the other hens would often follow her lead eventually, especially when they noticed her nabbing snow peas or beans I tossed over the garden fence. But Stickerz was invariably the first one to connect my entering the garden enclosure with a boon in vegetable treats. She was the first one to track my movements from her side of the fence, always remaining in my line of sight, making us a parade of two. Her soft clucks a version of “Throw me something, Mister!” hollered up at a passing Mardi Gras float.

Until four years ago, I knew nothing of chickens. While it’s true that for some number of years prior I said I wanted chickens, this want was based solely, I see now, on a desire for fresh eggs. I didn’t know enough to want the chickens themselves. A chicken’s just a chicken, I remember thinking, as if a hen were an egg laying machine and not a sentient creature. What, after all, was there to want?

Then David’s mother surprised us with an Easter gift of three Rhode Island Red chicks. These birds would be ours to raise for a full six months before egg-laying was even part of the picture. Stickerz, named by David’s young daughter, was one of these three birds. I soon saw that they were as distinct from each other as three dogs or three cats, but that Stickerz, who even as a chick seemed to eye the world with a fearless opportunism, was different still. She was the first of the three to fly up to the edge of the cardboard enclosure that housed the birds on the sun porch until they were big enough to move to a small hutch outside.

She grew into an alpha hen that never seemed to need to prove her status. Even as two new groups of hens came to merge with the original three, and there were inevitable squabbles in the ranks, Stickerz couldn’t be bothered by such triviality. She strode around the farm, a General among Privates, Corporals and Sergeants. Her eye forever searching for the prize the rest of the flock was too hither-thither to see. Especially in spring and summer, the time of year when Stickerz was in a great mood. Not just tolerant of human interaction, she sought it out, along with all the possibilities for food that we brought with us on our daily round: compost buckets, picnic lunches, disturbed earth, garden waste, meal worms. She’d get in your lap if you let her.

But woe betide Stickerz in winter. It was hard not to appreciate her obvious hatred of the snow and howling wind, even as she took out her ire on my gloved hand reaching into the coop for the feed bucket. There is very little to be happy about in the sub-zero depths of an Allegheny Mountain winter. Stickerz had the sense to be thoroughly pissed off about the situation. Although she nabbed my exposed flesh more than once, rather than angering me, the act actually made me like her more. Her curmudgeonly irritation at her circumstances, which were also mine after all, seemed a rational response to reality. If I could peck something, I certainly would. “I know, girlfriend,” I’d often tell her. “This weather stinks on ice.”

In the wake of Stickerz death, I’ve been thinking about how easy it is for me to diminish or even discount what I don’t know. Until I met Stickerz it was easy for me to generalize “chickens” as a “source of protein.” I certainly never considered that hens could have personality, much less that some hens, like some cats, dogs, or people, could be exceptional. Never occurred to me. Why? Because I had no experience.

“Imagine if she had lived her life in an egg factory,” I said to David. “All that talent gone to waste.”

Stickerz was a great huntress, yes. But every chicken is a miniature T-Rex, born to hunt. Not to stand in a cage or a warehouse with a concrete floor. Much to my shame, I never thought of this before I lived with chickens. Frankly, before chickens entered my life, my humanism was limited to humans. I would get impatient with PETA and similar organizations, thinking: yes, the suffering of animals is bad, but isn’t the suffering of humans worse? Not understanding, not even considering, that the two sufferings are deeply intertwined.

When we humans describe the lowest depths of human misery—slavery, sweatshops, forced labor, slums—we often append the words “like an animal.” Finding oneself a human forced by other humans to work, struggle, live and die “like an animal” is the worst state of human experience. But this isn’t because animals, left to their own devices, live and die in a joyless or degenerate way. It is because we have chosen to treat so many millions of animals in our care as if they are not sentient beings. We have relegated them to slavery, sweatshops, forced labor, and slums. We have broken the connection between them and the natural world to which they were born. Along the way, they have become the proxy for large groups of human beings whom the powerful have similarly corralled, confined and largely restricted from their natural birthright.

This continues because the powerful don’t know the humans being subjugated any more than I, four years ago, knew the chickens.

As I was once able to think of “chickens” as a “source of protein,” many powerful humans think of the less powerful as “the poor,” “the labor force,” “the fill-in-the-blank nationality or race” or, worst of all “civilian collateral damage.” The life of the human working 12-hour shifts on the concrete floor of a packing plant or standing in line for a bucket of iffy water in a ghetto or refugee camp or fleeing a drone strike explosion with children in tow is not considered by the powerful because the powerful know nothing about that life. That life, a distinct human self, does not exist to the powerful, any more than the lives of millions of chickens and cattle and hogs brought to an end each year. We have created a system in which neither the lives of the animals, nor the lives of the disposable humans can be recognized. “Progress” as it has generally been defined depends on the invisibility of both.

I reject this definition of progress. Not only is it morally corrupt, it is also practically stupid. The senseless suffering and death on which such progress depends can’t be sustained. Why not? Because it depends on division. It demands a sustained suspension of disbelief, which is to say, it asks us to agree that while other lives, many lives, even most lives don’t matter, our lives do. Human history shows that we’re only good at suspending disbelief, which is to say believing the unbelievable, for so long. Then the house comes a-tumbling down. It always has, thus I expect it always will.

Stickerz taught me to experience her as a self. For her short time in my life, she was a force that demanded a reckoning. By her personality, I was persuaded.

Certainly every human would be even more persuasive, if given the chance, any chance, to be known. What I call progress is not a flight from such knowledge, but a rush toward it, for the sake of animals and humans, all of us, an indivisible One. 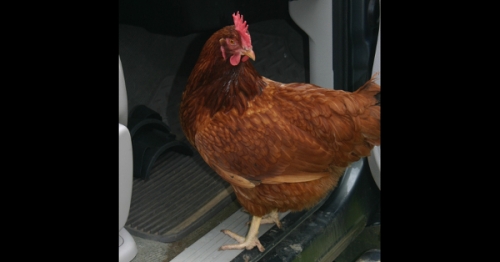