The morning dew soaks my jeans as I follow my dog, Cosmo, through knee-high whorled loosestrife. Crushed under my boots, it emits a fragrance very similar to that of white sage—the kind used by Native Americans in sacred ceremonies—mixed with a hint of sweet mint. I stop walking and savor the aromatherapy.

The dew, turned to vapor by the strengthening sun, rises around me like steam. It’s not yet 9 am, and already my skin feels damp beneath my shirt and the waistband of my pants. Licking the salty sweat from my upper lip, it occurs to me that I have lost any clear sense of where I end and this environment begins. The moisture on my face may have originated with me, or landed upon me, evanescent dew boiled out of a pot of leafy greens. The sheer intimacy overwhelms.

Yes, a barrier exists—between me and everything in this environment that is not me. Sometimes, however, the barrier is so slight as to be almost meaningless. My skin need not separate me if I allow it to feel. After many Allegheny Mountain summers, I’ve come to believe that the key to enjoying the season is letting myself be tongue-kissed by Nature.

The fact that my culture is built around such limited notions of acceptability, and the insularity from Nature that such distance incurs, distresses me. How secure can we be, as a people, if we require a nearly constant inflation or deflation of the real temperature in order to function? If we continue to value our individual and always transient comfort ahead of the myriad resources required to create it? If we continue to be so damn persnickety, so brittle?

A medium-sized butterfly, its rust-colored wings dotted with opalescent spots of white, lands on my finger and with its proboscis, begins sucking my sweat. Butterflies seek salt; apparently I’m a convenient salt lick. A long, tall drink of essential minerals.

I can’t feel the proboscis on the dead skin of my cuticles, but when the butterfly moves toward the webbing between my middle- and ring-fingers, its tongue, half orange and thick as an eyelash, tickles. As it sucks my various excreted salts through the straw of its tongue, I feel every movement, familiar as a lover’s.

The delicacy of the dance demands nothing less than my full attention.

I lift my hand until the butterfly, an Atlantis Fritillary, is not six inches from my nose. The butterfly proceeds with its sipping, indifferent to my breath. Unbothered by our proximity.
Its body is covered with what looks like fur. Burnt-orange fur that extends from between bulbous eyes to the tip of a neatly-tapered tail, and for several centimeters up onto its stained-glass wings. A border of shimmering apricot down.

I’ve never thought of butterflies as furry. Then again, I can’t recall having ever looked at one so closely, or for so long. Clearly, this fellow likes the taste of me, but I’m restless, eager to keep moving, and soon tire of serving as the drink du jour. Looking around for a likely flower with which to tempt him away, I spot the royal blue spire of viper’s bugloss some twenty yards ahead.

As I high-step through a dizzying array of thigh-high grasses, some with fruiting bodies stiff and prickly as pipe cleaners, others as softly seductive as cashmere sweaters, the butterfly remains, quite literally, unflappable. I wend my way past feathery, ethereal brome and sticky, white-flowered, earthbound spurge, carrying my passenger before me as if he were a flame and I a Saxon traveling at night upon the moors.

Cosmo has by now given up and flopped down among a cluster of oxeye daisy and yarrow in the partial shade cast by a nearby sugar maple. I tell him that it won’t be long now. He, having long since ceased trusting such claims, lowers his head out of view with an audible sigh. 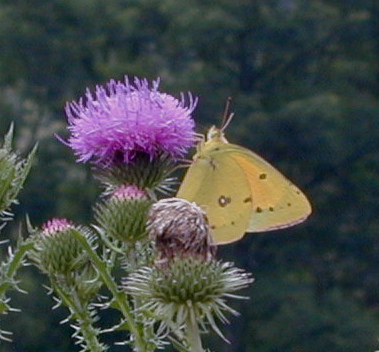 Finally arrived at my destination, I stare for a few moments at the tubular, slightly hooded flowers with red, protruding stamens, wondering again if their vague resemblance to snake’s heads is what convinced a medieval botanist to adorn the plant with such a fanciful name. Then again, since “bugloss” is from the ancient Greek word for “ox tongue,” it’s also occurred to me more than once that overindulgence in ale may well have been the main ingredient in the naming process.

I adjust my hand and brush the butterfly’s legs, only slightly more substantial than those of a daddy longlegs, against a single flower, which is not a simple blue at all, but a cunning blend of indigo and lavender. The butterfly steps onto the blossom, but before I can pull my hand away, he lifts off and lands once again on my skin. On the third attempt, I abandon all gentleness, and snatch my hand away as if the bloom on which I’ve placed him is indeed the head of a viper poised to strike.

“Cosmo! Let’s go!” I holler, walking away, not looking back.

I only make it a few steps when a northern ring-necked snake catches my eye as it slithers through a patch of horse nettle decked out in white and lavender flowers almost identical to those of its relative, the potato. I slow my pace and bend at the waist to follow the snake, whose dark, slate skin appears satiny soft as the finest glove leather. The ring around its neck as gold as a sun god’s necklace.

Cosmo arrives at my side. In a burst of speed the snake disappears.

That’s when I feel my once-and-future Fritillary alight on my bare shoulder. I turn my head slightly and watch it out of the corner of my eye. The butterfly’s proboscis is at it again, Hoovering up my sweat. He doesn’t seem to mind the sunscreen.

I begin walking, slightly awkwardly at first, as though balancing a china teacup on my shoulder, but then with increasing naturalness. Soon, I catch sight of a Cooper’s Hawk circling overhead. His black-banded tail reminds me, strangely, of a marine signal flag, something I haven’t thought of in years. My grandfather was a Captain in the Coast Guard. As a child, I was fascinated by his collection of flags and the mysterious language they contained. There’s a three-banded flag that, alone, means “Affirmative” or simply “Yes.” Used in series, it also stands for the letter “C” or “Charlie.” The bands on the nautical flag are red and blue, not black. Still, there’s some commonality between it and this bird’s tail. Some signal connection in my mind.

Yes, I think, watching the small hawk, which has the buff-colored, sparsely spotted breast of a juvenile. Yes. He circles higher and then soars toward the valley and out of view.

Now on our way back to the cabin, Cosmo and I take a detour to explore the laurel thicket below the Spring Road. Sometimes called “laurel hells” for the difficulty of walking through their tangled, knotty roots and trunks, these tight-knit collections of evergreen shrubs, some twenty feet tall, leave precious little clear ground on which to step. 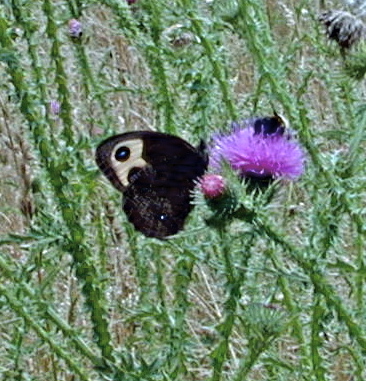 This difficulty does nothing to dispel the magic, in June, of seeking out the deep pink buds mixed with clusters of thimble-shaped white flowers. The magic of entering the slight gloom of the under-story and feeling the cooler air shiver my sun-hot skin as a whiff of the bloom’s powdery scent draws me—pulling me further on, further in. Walking among laurels provides a sensory contrast that hints at—if not the presence, then the promise—of heaven, and of discovering it where I expect to find it least.

“Instead of getting to Heaven—at last,” as Emily Dickinson wrote, “I’m going all along.”

After 15 minutes or so, I’ve almost forgotten the passenger on my shoulder when I hear the gentle flutter of take-off by my ear, and then feel him alight on the crown of my head. After a couple attempts to find secure footing amid slick strands of hair, the butterfly settles in and begins exploring my scalp.

I giggle aloud. What choice do I have? Only God could be the milliner of such a crown.

The fact of the butterfly’s arrival upon my head is a gift beyond expectation, a blessing beyond understanding. I imagine myself amid the ever-stylish, and never-without-a-crown, Church of God in Christ ladies who filled the streets of my childhood Memphis. “Girl, look at that!” I can hear them exclaim. “Now, where’d she get herself a butterfly for a hat?”

I call Cosmo and we head up, out of the laurels, back to the Spring Road, toward home. I hold my head a little more level than usual, my neck just a little bit straighter. I’m certain the Church of God in Christ ladies would approve.

As I walk in my pageant gait up the incline, I wonder about St. Francis of Assisi. I imagine his fabled ability not only to attract Creation’s non-human hordes, but also to earn their trust. He spoke to the birds as sisters and to the wolves as brothers—and they flew and walked beside him as his sisters and brothers.

There was no coercion. Dominion, with its tangled certitudes, never constrained his love—or theirs.

He’d honor the stowaway in my hair.