Cold By Any Other Name

“It's cold out folks. Bone crushing cold. The kind of cold which will wrench the spirit out of a young man or forge it into steel.”

“Adopt the pace of nature: her secret is patience.”

I’ve found myself staring out the window, any window, a lot this month.

Staring empty-minded into snowy murk that reminds me of nothing so much as a current of plankton-filled seawater. A current rushing past the window as it once rushed past my scuba mask. A current so close, a mere arm's length away, but far enough beyond the underwater cliff-top over which I floated to give me pause. Stop my progress, if only momentarily.

Out there, in the colorless abyss, a woman could lose her bearings.

This was the revealed secret at the heart of the water-current’s seductive force. And so, more than once, more than a dozen times in my scuba-diving years, I allowed myself to float forward into that powerful flow. Eyes focused through the plankton swirl to the impenetrable gloom, I allowed myself, if only for a few moments, to be taken.

Taken in. Taken over. Taken up by Nature. If only for a few moments, I untethered my self and let her go.

This Allegheny mountain December, I stand at the storm door and trace my fingers along the ice crystals formed on the inside pane. Just beyond the glass, the snow-globe snow swirls, directionless and upended, glowing in the impenetrable gloom.

But I’m not taken in, not taken over. Despite my desire, despite the visions of Caribbean reef fish schooling in my head, I’m not taken up by Nature. Not today, no. Not right now. I remain quite tethered to my self and quite limited by my life on this side of the ice-sheathed door.

Why? Because its just too damn cold.

By which I mean frigid, gelid, polar and bleak. Cutting, raw and rimy. Nippy, snappy, frigorific (causing cold), frosty (devoid of warmth) and frore (frozen). At the very least, folks, its seriously shivery.

So, rather than floating forward into Nature's powerful flow, I pull back. I withdraw my fingers from the frozen glass. I shut the inner door. I stand by the fire and turn my face toward the window. I stare out, as if expecting against all empirical evidence the arrival of a too-long-absent lover. I am Marianne searching the horizon for Willoughby in Sense & Sensibility. Catherine waiting upon Heathcliff in Wuthering Heights. Scarlett mooning after Ashley in Gone with the Wind. (Well, maybe that's a bit much. After all, it is only December!)

But isn't that the point? Only December. So early in our separation, mine from Nature, so soon this barrier of glass and wood come between us, and already, already, yes, I feel a heart-scouring loneliness no less potent than that of these fictional heroines.

After all, it was just last month that I plunged my hands into warm dirt and felt potatoes snug against my palms. A woman gets used to such things.

Staring out the window, I can't help but ask: How could you? How could do this to me?

I watch juncos wiggle bird-sized notches in the snow atop the deck railing. They appear absolutely resolute in their commitment to persevere, come what may.

I, being human and Scarlett-like, am nowhere near so accepting.

As a gust of wind sends a raft of roof-snow careening into the birds, my only thought is profoundly parsimonious: How could you be so cold?

Cold. By which word I am referring not only to the absence of heat, but to the absence of sentiment. Make no mistake, there is a coldness to Nature that has as much to do with attitude as it does with temperature. There is an abruptness, an inexplicable withdrawal of obvious signs of affection that puts me in mind of a fickle lover, that causes me to gaze out the window in yearning contemplation of all the many whens and whys she is not about to answer--not now, not ever. There is an absolutism about her that shocks and offends my modern, delicate sensibilities and tempts me to rebellion. My every molecule demands an explanation.

As this long December draws to a close, I know I would be much better served by patience.

The pace of Nature, it would seem, is the pace that adjusts--on the fly, at a wakeful moment's notice, as required. It neither pushes nor holds back. It is both the current and everything that enters the current. Nature is patience--whole and entire.

Which means, even when she's bitter cold, Nature contains me. And though she may see fit to withdraw her obvious signs of affection for a time, it's nothing personal. Really. It's just something she's gotta do.

I know this, I do. I just forget it sometimes.

This has been one hell of a cold-dark month.

I watch snow flakes blow horizontal across the deck. The snow-topped rail is a barrier beyond which all is milky-murk. Would that I could stand on that rail and cast off to float gently in the flake-tossed air over Hidden Valley and hear the stone-rush of Slabcamp Run.

Even now, inside my walls of glass and wood, I dare to hear the music. Do you?

I hear the song-promise of Spring, buried deep within those frozen notes. 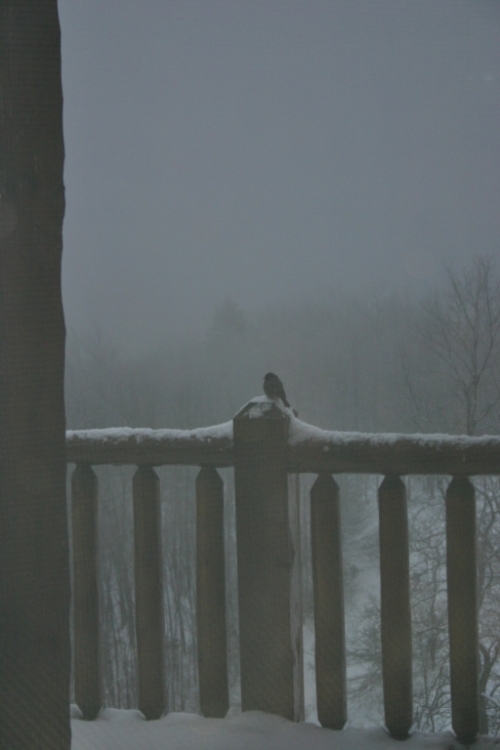