My world is once again covered, coated, lapped and bathed in white. Five inches of snow sits atop the deck railing where the juncos haven’t knocked it down to create notches in an otherwise continuous layer of white-on-brown, a generous coating of vanilla icing on gingerbread. Beyond the railing, branches of the closest trees wave in the snow-laden air like soft coral in an underwater current. Past these trees the air itself seems to thicken, obscuring everything else. As the rate of snowfall ebbs and flows, the white-white of whole milk becomes the gray-white of the skim milk my grandmother called blue john. When the wind picks up the air thickens further, resembling not air so much as aerosol whipped cream.

Early this morning I heard a bluebird burbling away, and looked out the bedroom window to see him sitting on the snow-covered peak of the martin house. He was an incongruous spot of glossy color in an otherwise iconically wintry, Christmas card scene. No less than a bellowing Who on Horton’s speck of dust, the bluebird seemed to be singing to Mother Nature herself: We are here! We are here! We are here!

Once the snowfall began again in earnest, perhaps the bird decided it the better part of valor to move inside the martin house and wait out the storm in silence, as I haven’t seen nor heard him since. Cursing the weather is dictionary definition-level absurdity, yet I must admit I take some comfort in the thought of him peering out of the house, much as I peer out the window, and sighing gloomily.

I imagine the chickadees similarly ensconced in the snow-caves created by conifer branches. Their bright eyes dimmed in the eerie half-light. Their voices depressed into a thoroughly atypical silence. Birds don't get depressed, you say? Tell that to the recently-arrived juncos. All winter, we've had a resident coterie of ten or twelve that just this week swelled to more than 30. While I certainly don't know from where the newcomers flew-in, I find it hard to imagine it was snowing there. It's a particular posture they adopt that seems to speak as loudly of their discomfort with the weather as do their notably silent beaks.

The full-time resident juncos have an unmistakable style all their own. While the other resident avian species, even the mourning doves disappear in a snowstorm, juncos, like hurricane hold-outs on Key West, prefer to ride it out. Most of them right out there on the deck railing, in the center of the dervish swirl. They pull their heads down into their bodies and plump out their sides, as if to lower their center of gravity. And then they hang on and wait, scowls carved on their faces. Remember Forest Gump's Leiutenant Dan tied to the mast of the shrimp boat, cursing God in the midst of a thunderstorm? That's a man after an Allegheny Mountain dark-eyed junco's heart. Minus the cursing, of course.

That's why I suspect they're all newcomers from some milder clime clustered on the lacy branches of an arborvitae growing on the leeward side of the house. Although they are successfully avoiding the worst of the snow and wind, these birds have all the dignity of tree decorations at an everything-must-go after Christmas sale.

A wee bit too much projection, you protest? Over-the-top with the anthropomorphosis?

Ah, give me a break. It's been a long winter. Perhaps my brain is liquifying from lack of sun.

Back now from plowing. You'll be happy to hear that I saw not just one, but eight, eight!, bluebirds poking their shiny heads out of different holes in the martin house. Not singing, no. Not flying about. Just sitting there. Heads out. Bodies in. Waiting. Or so it would seem. Waiting for the snow to stop. What else?

But it doesn't stop. It falls as if the sky is being paid to make it. Dollar a minute work. I think of the snow-makers up there, hanging in the sky like Brer Rabbit in a tree.

As I watched the snow flowing back from the plow blade, I reminded myself that it was as beautiful, every bit as beautiful, certainly, as the snow-wakes created two or three months back. And the temperature a good 20 degrees warmer! "It's 32 degrees. It's practically hot!" I hollered at Cosmo in the back of the Rhino as he stood squinting into the stinging snow, a flatly doubtful expression on his face.

The wind at the gate was, by any measure, fierce. But I knew it felt even fiercer than it was because I didn't expect it to include eight inches (by my late-afternoon measurement) of well-drifted snow and more still falling. April wind is ohso de rigueur. April wind and three foot snow drifts is an unspeakable breech of etiquette.

There was no seeing out the Rhino windshield. Snow fell so fast and thick that as soon as I cleaned it, it was covered again. I had to hang my head around the side, and use my glove-encased finger as a wiper-blade across my eye-sockets. "It's all in your attitude!" I hollered at Cosmo, as I worked on the drift, pushing forward, reversing, pushing forward.

"It's a matter of balancing expectations and reality!"

"If this were happening in January, we'd think it was fun!" 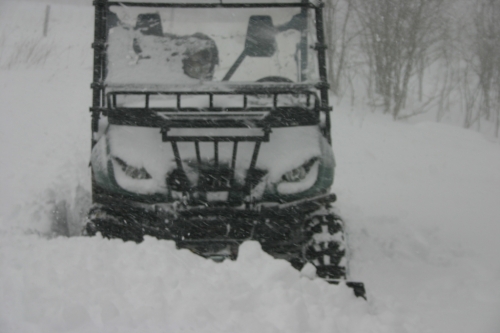 Cosmo doing his best to pretend it's January.